With the Tumut Bulls first-grade side on the bye in round five of the Southern Inland Rugby Union (SIRU) competition, all attention shifts to the Red and Blacks second-grade side and their upcoming away trip against the Hay Cutters.

Playing at Hay’s Number One Oval, the fourth-placed Cutters will be a toughest task again.

Bulls second-grade captain Travis Walmsley explained that first-grade talent will be on hand to help out, with numbers again an issue.

“We are short and we are hoping first graders will play,” Walmsley said.

“We had 12 last week and we needed first-graders and right now, we only have 7 but we need to field a good team because it is their Ladies Day and they want a competitive game.”

The Bulls will arrive in Hay fresh off a solid 28-7 win over the Albury Steamers, but they were helped by the likes of Jon Carmody, James Murray and Will Kingwill stepping up.

Walmsley explained it was a tough situation, with injuries in first-grade placing pressure on his side, while unavailabilities just meant numbers were thin in general.

“It’s just how it is. Guys are unavailable and are injured,” Walmsley said.

The Bulls will welcome both Damien West and Jack Heffernan back to the fold in the coming weeks, and with more players hopefully returning to first-grade from injury, including Lewis Simister and Vincent Wise, there should be more numbers to call upon from round six onwards.

For the time being, it will be a matter of blokes standing up and making the trip to Hay as the Bulls deal with numbers and a tough start to the 2022 season.

In the remaining second-grade SIRU games to be played on Saturday, Reddies host Griffith, Leeton host Aggies, City host Waratahs and Albury are on the bye.

Gundagai too good for Tumut in local derby 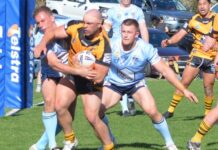